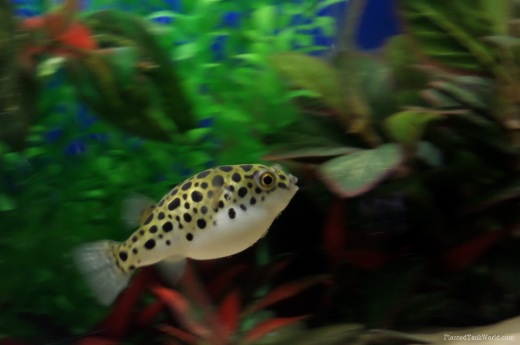 As I have covered in some previous posts, Green Spotted Puffers (GSPs) have some rather unusual requirements compared with standard community tanks. Even a puffer in a fully cycled, well maintained tank can be stressed or prone to medical issues. Outside of obvious illness or injury, here are some symptoms of GSPs who might need a habitat adjustment.

There are of course signs of illness or damage that should also be monitored! The above four symptoms are commonly seen in combination with symptoms indicative of illness or injury. In addition to ruling out possible sickness or injury, always perform water tests to rule out ammonia or other chemical spikes. If both the GSP and water appear in otherwise good condition and the GSP has enough tank space (recommend 30 gallons per GSP) without worry of being bullied, then consider changing one of the following:

A photo of Jake, still in the bag, on the way home from my local aquarium store.

When I first got Jake, I acclimated him to the same conditions as his store tank – pH of about 8 and specific gravity (salinity level) of 1.005. I monitored water conditions, temperature, and tried to move decor occasionally to keep him interested in his surroundings. Yet Jake was still an extremely shy GSP who tended to flee at the first sign of movement in the outside world. One of my first DIY projects for fish tanks was to build Jake a structure that would meet many of his recommended needs for his surroundings. Thus, I wanted the structure to block lines of sight within the tank, provide hiding spots for Jake, create an interesting hunting ground with many places for feeder shrimp and snails to hide, and encourage exploration of all levels of the tank.

I used aquarium safe silicon and a collection of rocks from outside my apartment as the basis for the construction. I had to build it over a period of weeks, letting silicon dry to build stability. The interior of the fort was not the prettiest, as it showed the bulk of the silicon. I designed the castle to have many “windows” of sorts for Jake to swim through, and using man medium sized rocks gave Jake’s prey plenty of safe hiding spots. I also created bowl-like outcrops at various heights of the fort, allowing me to add substrate and plants to the structure.  Here is a very old, blurry photo of Jake exploring the finished project:

I made sure to let the entire fort dry thoroughly then soak for two weeks in water before even attempting to put it in the tank with Jake. Everything I used was aquarium safe, and the structure went on to last another year. If I ever build such a structure again, I would be sure to thoroughly scrub every rock. The silicon eventually began to pull from the rocks after a few months of being submerged and repositioned. Jake loved the structure quite a bit. He went from hiding for most of the day to searching in every nook and cranny of the castle for a hiding snail or shrimp. 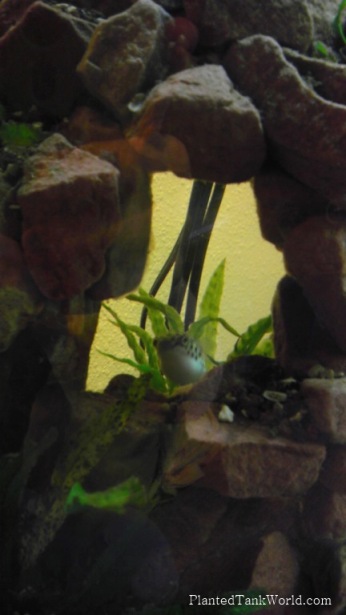 Jake watching me through a window in the castle. Quite suspicious!

Due to the brackish environment, growing live plants can be quite difficult in a GSP habitat. Thus, I recommend using silk plants over potentially sharp or pointy plastic plants to protect your puffer! Jake also loves broad leaves to nap on, like the anubias below. Some of the broader plastic plants can be perfect for this, just check for potentially dangerous edges before adding them.

Jake waking from a nap on an anubias leaf.

Finally, here is a full tank shot. This was the second iteration of my GSP tank, and it was quite a long time ago. Since then, I’ve learned a lot about arranging tank space, using backgrounds, hiding equipment, and taking photos! I was really proud of this tank setup back then; it was one of the first times I ever took photos of my own aquariums! 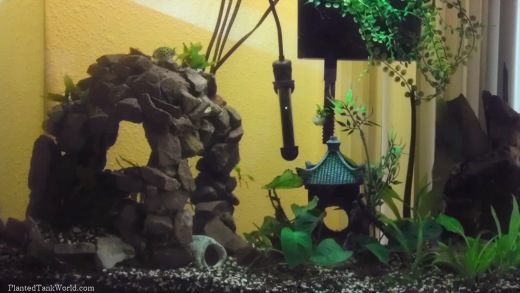 Full shot of my old GSP tank. One of my first aquariums from a long time ago…