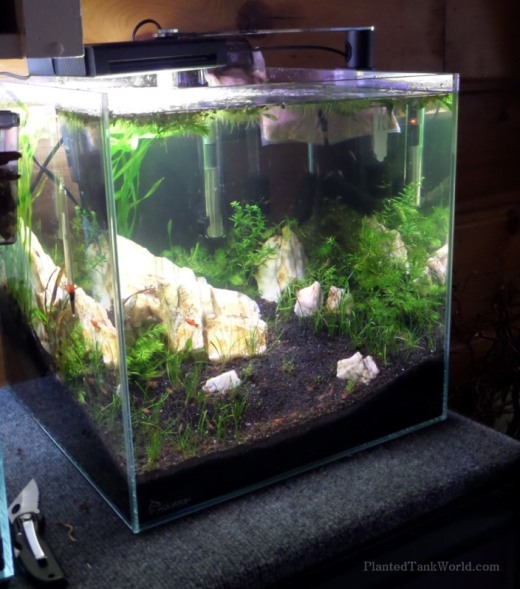 Here’s my “Death Mountain” tank, though the way I’ve been trimming the vallisneria spiralis (the tall green plant in the back left corner) and cutting all other plants low has made the similarity to the video game mountain less obvious. 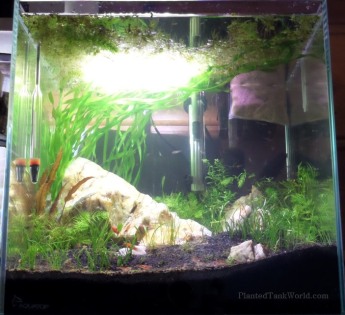 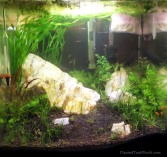 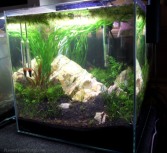 Plants are starting to grow in well, and my red cherry shrimp began breeding almost immediately after being added. I’ve still got the Boraras brigittae swimming around in the back of many of the full tank shots. They were doing quite well, being very friendly and adventurous, until a recent water change that disrupted the substrate. I’m planning on setting up a more stable habitat for them, with lower lighting and more leafy plants to hide in, quite soon. I’m also tempted to add in a gas CO2 system to improve growth, because my impatience is starting to get the best of me! 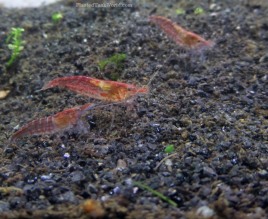 These are the newest inhabitants of this tank. I ordered 30 red cherry shrimp. They were rather cheap, as many were culls from a shrimp breeder. Included with the shrimp were also three fish I hadn’t expected. Two red wag platies and a female guppy, all still quite small and young, were thus added to the tank with the shrimp.

I am really enjoying watching the shrimp go about their daily activities! Their limbs are a blur of motion, constantly picking up little tidbits from around them. The males are rather pale and small compared to the bright red females. They group together in a huge colony when feasting on added food.

I’ll update again once the tank has progressed further!

Everything in this tank is beginning to really take off. I’ve found a good balance with the plants, fish, shrimp, snails, and my own water changes and filters. I think this setup is finally established enough to begin moving the heater and filter to less visible locations in the tank. One of the changes I made that seems to have really impacted the tank was putting a bag of Seachem Purigen right in front of the filter outflow. It is amazing for removing tannins and excess nitrates, nitrites, ammonia, etc. I like to buy the prebagged Purigen, even though it is more expensive by weight. Trying to bag and recharge Purigen was difficult. The stuff I linked to is really easy to use, super compact, and discrete.

Here are some more pics of the tank:

And here are some zoomed in photos where you can see some of the chili rasboras I’ve added to the tank. 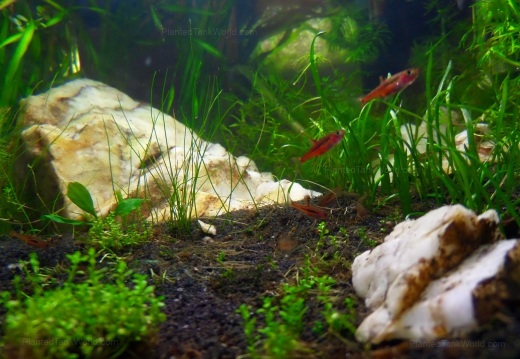 They seem to be doing really well in the setup. There were so many munchies for them growing in the tank during this initial settling period that I’ve barely had to feed them. Full bellies all around. I had only ever really seen them in fish stores, where decor is kept to a minimum to make them easier to be seen and caught. They’d usually be in the mid levels, floating around. In this tank, they’re usually weaving between plants just above the substrate, looking for a snack. Counting more than five of them at any given time is a difficult task unless I just added some food.

I originally put ten or twenty snails in this tank to keep the dying plant matter in check. Anytime new plants are added, there’s a good chance that they’ll have some sections die off as they adjust, especially if the original environment is quite different from the new one. I’d added mostly pond snails and MTS, both of which have begun reproducing quickly given all of the food available to them. Most of my tanks have had bettas, loaches, or puffers that naturally kept snail populations in check. Luckily, my green spotted puffers love a snail feast, so I’ve been nabbing snails every few days. They’ll all crowd to a piece of algae pellet if I drop one in, then I can just scoop out a large group of them with ease. Still, I am a bit concerned by how many newborn pond snails can be seen, especially on the floating salvinia roots. Hopefully that doesn’t get out of control!

I’ve decided to dub this tank “Death Mountain” for now, though this is certainly more lively and friendly than its namesake.

Death Mountain from Legend of Zelda: Orcarina of Time.

Here is how each of the plants have been doing:

Hornwort/Coontail (Ceratophyllum demursum) – Growing well. I’ve added some more to the tank. This stuff seems to be pretty indestructible. My main complaints are that it sheds needle like leaves everywhere, making the tank look dirty. The only other negative comment I have is that I wound up with trimmings of it that have exposed stem areas which don’t look nearly as nice grown in areas.

Cryptocoryne wendtii – Had some initial melting, but overall it is doing well. I pretty much expect any crypt I plant to have an initial melting period. Same applies when making drastic changes to water parameters, which should be avoided if there are fish or inverts anyway. I’m liking the red shade its getting.

Water Sprite/Indian Fern (Ceratopteris thalictroides) – I love using this plant and keeping is trimmed low to the ground. Usually I’ve seen it allowed to grow freely, where it can easily grow to 24″ or more. Yet its finely detailed leaf structure makes it a good candidate for planted tanks. And it grows fast, keeping nutrient levels more consistent. This just means trimming or discarding overgrown sections.

Bacopa monnieri – This died off entirely. I’ve never been able to get this plant to survive in any of my tanks. I had a few pieces from a plant order earlier that day that I decided to try. Failure. Not sure why this always happens to it in my tanks. If you have an idea, let me know!

Dwarf Hairgrass (Eleocharis acicularis) – Growing well and spreading. It’s not a fast process to carpet a tank. This is the miserable waiting period. I’m trying to disturb it as little as possible and give it lots of light without giving algae a chance to grow.

Rotala indica – This is doing okay. It’s lost a lot of its coloring and is struggling a bit. I’m not sure if it will make it in the long run. For now I plan on leaving it alone as much as possible in hopes that it can adapt to the new environment. 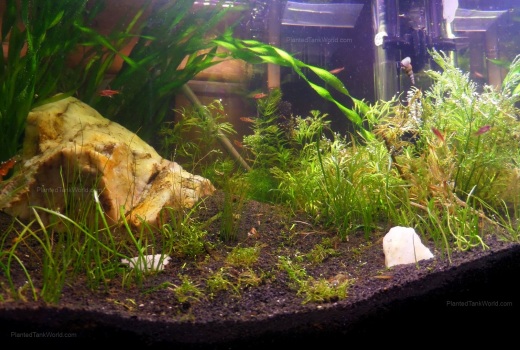 Microsword/Copragrass (Lilaeopsis novae-zelandiae)  – Also doing well. It’s going to take time to get this thick enough for my tastes, but there are already a few new growths visible.

HC Cuba/Dwarf Baby Tears (Hemianthus callitrichoides) – Still not sure if these will make it. They are very CO2 reliant, and I’ve been hesitant to setup the gas CO2 system (should get a better regulator to keep consistent CO2 flow) or dose with Seachem Flourish Excel (shrimp not settled). The other half of my battle with this plant is in the keeping it planted well. I have a decent number of Malaysian Trumpet Snails (MTS) that are wonderful for maintaining substrate, but they do this by digging around just under the surface. With HC’s delicate and shallow roots, this is slowly driving me mad. I had a nice carpet of it in another tank tanks to CO2 gas and later maintaining it with just Flourish Excel.

The big circle of light above the tank in the first two photos is due to the floating plants being right under the light. I have both frogbit and salvinia floating to keep the tank in balance and nutrients in check. They also help disperse the light evenly throughout the tank. I usually keep the floaters in place using another new addition to the tank, Vallisneria spiralis in the back left corner. My original plan was to keep all of the plants short and low growing. I was going to have the crypt be the tallest, and maybe even remove that once the carpet grew in. This plan also coincided with an Iwagumi style rockscape. Since my rocks weren’t good for Iwagumi, I am now trying to find a good way to use them that creates balance, perspective, and depth within the tank. Suggestions welcome!

Also, I added chili rasboras and cherry shrimp! I’ve be doing creature profiles on them soon.