On a recent trip to New York City, I decided to see what aquatics stores might have to offer. Overall, I was fairly disappointed in the the selection of stores I could find. One of them was a disturbingly barren and algae ridden. Most aquarium stores that were listed online were no longer in business at the address given online. Most of my day was spent wandering around, becoming increasingly frustrated by abandoned or missing storefronts of businesses that still had working answering machines and websites.

There were two beautiful gems amid the chaos. One of these was Manhattan Aquariums. They are a aquarium store with a strong focus on marine fish and corals, but they also had some beautiful freshwater tanks. By this point, my battery was dying, so I didn’t wind up even taking any pictures of the freshwater tanks! The store was very clean, had a huge selection, and had some absolutely amazing display tanks. Here are some pictures of this store:

Freshwater is against the far wall.

Gorgeous Display right inside the door!

The second store I visited was Pacific Aquarium Inc. They had a ton of freshwater and marine fish, lots of plants, and ample supplies of every sort for planted tanks. Beautiful petrified wood pieces, a variety of substrates, planting tools, … I spent a lot of time here looking at everything. It was a lot of fun to see all of the potential supplies, fish, plants, and aquascapes available today!

Here are some pics of their amazing freshwater aquascapes 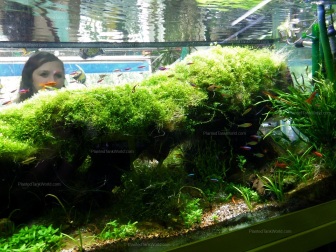 So many differnet carpets!

And here are some of the back store, where the majority of the fish (fresh, marine, etc) were housed. Everything was clean, the fish all looked quite healthy, and the plant tanks didn’t seem to have a single snail. Beautiful store! 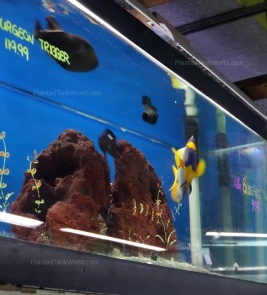 I’m hoping to have my next short trip be to a city where I might get to see some great tanks. So, if you have a recommendation of a beautiful aquarium store to visit, let me know!