Here are a few quick shots of how my 10 gallon is currently filling in. Right now it homes some Furcata Rainbows, Corydora habrosus, and otocinclus. The rainbows prefer hard water, while the corydora prefer acidic water, so I plan on making some stocking changes in the near future. For now, I’m keeping the tank around neutral and as stable as possible until I can give these guys more favorable water conditions. 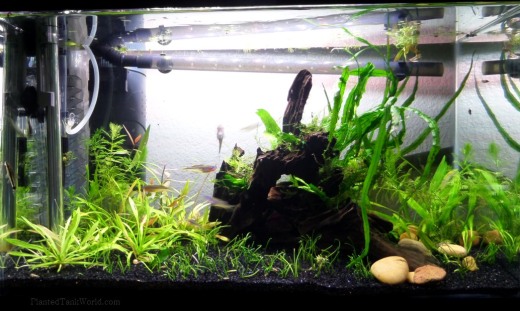 For some reason this tank has always given me grief with growing plants. I’ve been dosing regularly with Excel when not using a DIY yeast reactor, as well as occasionally adding some Flourish or basic macro nutrients. I cut down on the floaters as I’m not down to a single Marineland light fixture which has rather poor LEDs in it at the moment. My efforts seem to finally be paying off!