A poor Albino Bristlenose Plecostomos, aka my albino BN pleco, was one of my first fish. These guys are quite hardy, as seen first-hand in how my eldest managed to survive many of my early mistakes when first starting fish keeping. I now have three in my 150 gallon, two of which are still quite small compared to my full-grown male. 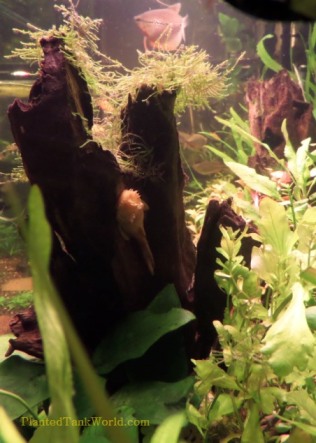 My adult male BN pleco – quite talented at hide-and-seek, hence we named him “Waldo”

Plecos are not “waste” eaters. They eat some types of algae and leftover food that makes its way to the bottom of the tank. While not picky eaters, if your BN’s tank doesn’t have much algae and you feed your fish quite sparingly, then a BN might run into nutrition problems. Adding sinking algae wafers, blanched or raw veggies (cucumber, lettuce, etc), or sinking pellets can ensure good nutrition for a BN pleco. 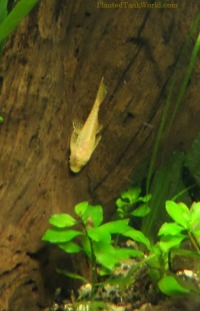 BN plecos can be sexed once they have aged enough to either have noticeable bristles or to be permanently clean shaven. Males will develop the bristles connected to their common name (bristlenose pleco), while females will not. Mating is fairly easy, and, after laying eggs in a secure location, the male will guard the young. Both males and females have armored looking skin, with beautifully aligned scales along their bodies, like with the pleco below.

BN plecos do not have especially renowned eyesight, but I still like to pretend that the male below was staring longingly at the female on the rock in the distance. Hopefully one day I’ll have some little BN plecos swimming around!