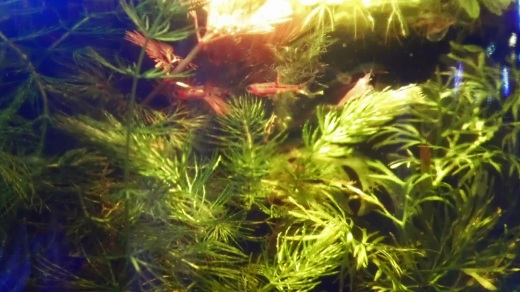 I wanted to try using the Walstad method on a smaller tank just to give myself an idea of how everything would work out. If you’re not familiar with the work of Diana Walstad, check out some of these links: Aquarium Wiki, Amazon Page, or Aquariss Interview. In its most basic form, you first need to put down soil, which gives the plants all of the nutrients they need and gives good bacteria and small organisms places to thrive. However, soil on its own in the tank would result in too high a concentration of nutrients diffusing into the water column, causing algae blooms, toxin level spikes, and generally making the tank brown and muddy. So, you need some sort of a “cap” material to put over the soil – usually sand or gravel.

Many people setting up their first Walstad run into issues with air bubbles breaking through the cap, spewing soil into the water. Others have trouble figuring out the right depths of materials to use, or have trouble planting. Basically, there are many potential pitfalls when using a multi-step method for setting up a tank, and I wanted to run into them with an easily manageable tank that I wouldn’t min destroying.

It took me two tries to get the material depths decent, and I learned that it is a lot easier to wet your soil before putting it in the tank. This way, fewer air bubbles form, and the soil can be used to aquascape the terrain to some extent. I used dark sand rather than play sand. As I mention in the post about preparing a quarantine tank in a moment’s notice, I always keep extra seeded filter media on hand. I also used water and plants from an established tank along with some Tetra SafeStart, so the tank was effectively cycled pretty much immediately.

The second day I did a 50% water change, mostly to remove tannins, and refilled it with water from an established tank. Then I threw in some snails – Ramshorns and Malaysian Trumpet Snails – to eat any decaying plant matter and stir up the substrate.

After a week of growth and testing levels of ammonia, nitrites, and nitrates to ensure all really was well, I added some red cherry shrimp. These shrimp had come from my 150, so many had reverted back to wild-colors (browns mostly). I did water changes weekly, and topped off the tank if it looked low. I also threw in three chili rasboras. Chili rasboras are often mentioned as being territorial and needing tanks of 10 gallons or more. After seeing aggression issues play out with my pygmy gourami, I wanted to see how these little rasboras would interact before I began planning a tank for them.

Here is my mini-walstad after a month of growth:

Here are the full tank specs:

Substrate – Miracle-Gro Organic Choice Potting Mix, available here, capped with Carib Sea ACS00821 Tahitian Moon Sand, available here. The sand winds up being almost shiny, which I wound up not liking very much. It is a very nice dark black though.

One thought on “Single Gallon Walstad – My First Walstad”