What are listed as “ghost shrimp” in stores are not always actual ghost shrimp. Many shrimp belonging to the Palaemonetes genus get generically labeled as ghost shrimp by inattentive sellers. The Palaemonetes paludosus is what is typically considered to be the ghost shrimp, also known as the American Freshwater Glass Shrimp (or a variation on such a name).

I’m a big fan of ghost shrimp for the following reasons:

The only real downside to these guys that I have run across is that they are carnivorous. If they can, they will eat other, less aggressive or smaller shrimp. So if you want to start with ghost shrimp then transition to red cherry or other such varieties, it would probably be best to remove the ghost shrimp first. This aggressive behavior is also what allows them to live with bettas, which red cherry shrimp typically cannot do.

Here are some pictures of my ghost shrimp: 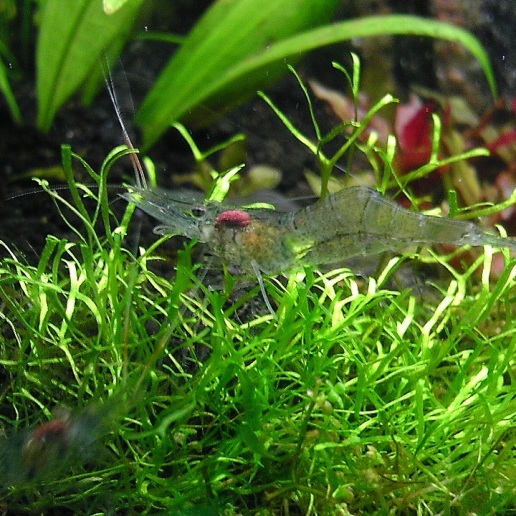 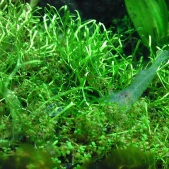 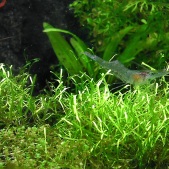 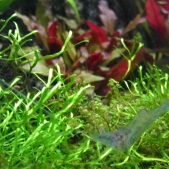 To be blunt, putting three pygmy gourami into a single ~3 gallon tank was really stupid of me. Despite warning online, I didn’t fully realized how territorial these little guys can get. I’d worked with “territorial” fish before that have warnings listed consistently in profiles about them, but they usually just chased away threats then returned to their claimed area. These pygmy gourami are different in how they interact than the other fish I had worked with before. In such a small tank, even with ample cover, the pygmy gourami chase each other down. They follow their target through the moss clumps, leaves, around driftwood; it didn’t matter how much cover there was because the aggressor was willing to follow the fleeing fish through any terrain.

Thus, after the first week, one of the three had begun to be singled out with obvious signs of stress and aggression. I let the chasing go on for a few days, in hopes that a pecking order could be sorted out between the three. Often this works with semi-agressive fish. Once I saw torn/chewed fins on one of the sparkling gourami, I ended my little test sparkling gourami tank. At first I moved the injured pygmy gourami, but soon after I also moved out the second one. The original king of the junk tank now remains.

Here’s some shots of the tank and the remaining purring gourami that stayed still for long enough to snap some shots.

One last behavior trait that I’d like to mention with the guys is that they really do make quite loud sounds! This is where the nickname “purring” gourami comes form, but I’d say its more of a loud click. I usually hear it when one of the two gourami has found the other, perhaps as a sort of warning or signal to the other. Sometimes the more dominant one would swim up next to the other and make the clicking noise before scooting away or inciting a small chase.

Let me know if you have any questions, suggestions, concerns, etc about this setup! And please never try to push the limits on stocking pygmy gourami. These guys really, truly, with no exceptions seem to need at least 10 gallons with lots of cover and hiding spots if you want to have two.

I finally added some fish to two of my smaller tanks. The first are three Trichopsis pumila, more commonly known as the pygmy gourami or sparkling gourami. Here’s the standard photo of them that is currently the wikipedia stock photo: 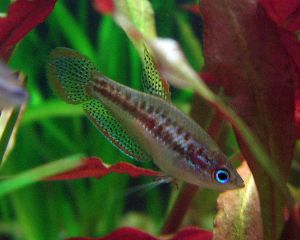 These little guys are far more shy than I was expecting, but every day they’ve been more adventurous and had brighter colors.

Pygmy gourami are from regions of Southeast Asia (continent and islands). They can typically be found in slow or standing water with surface growth or coverage, much like most fish of the gourami family (Osphronemidae). Sparkling gourami thus can be found many ditches, ponds, rice paddies, and other bodies of water without strong currents. Also like the rest of the gourami family, each has a labyrinth organ, letting them breath air from outside the water if necessary. Thus, sparking gourami fit their niche environment of shallow water with low oxygen quite well. Their small size (only about 1.5 inches max) makes them a small bioload that can navigate through dense plant growth.

I have three juveniles in a small, heavily planted 2.65 gallon Hagen Marina 360 I picked up on sale for $30 a few months back. The minimum tank size for sparkling gourami is usually listed as 10 gallons, so I’m going to be keeping a close eye on these guys for signs of stress or territory issues. For now, they’re all well under an inch long and seem to be enjoying their new home. I’m only using the stock light, so they have a nice dim environment. I also have a nice piece of driftwood with many nooks and holes. Since this tank was originally designed as my scrap trimmings and snail tank, it now has a variety of plants growing on most every surface as well as floating at the surface.

I’ll update again once I have some nice pictures and the new fish have fully settled in. I hope to sex them and maybe have a go at breeding if it turns out I have a pair.

Edit: Update on this tank has been posted! It includes some pictures and descriptions of the behavior of these interesting little fish.